Places to Visit & Things to do during DefExpo 2022! 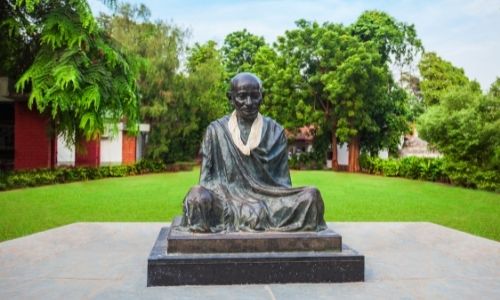 Sabarmati Ashram (also known as Gandhi Ashram) is located in the Sabarmati suburb of Ahmedabad, Gujarat, adjoining the Ashram Road, on the banks of the River Sabarmati, 4 miles (6.4 km) from the town hall. It was from here that Gandhi led the Dandi march also known as the Salt Satyagraha on 12 March 1930. In recognition of the significant influence that this march had on the Indian independence movement, the Indian government has established the ashram as a national monument.

Indroda Dinosaur and Fossil Park is located on the banks of River Sabarmati. This 400-hectare park is the second largest dinosaur-egg hatchery in the world. The park premises include a zoo with exotic animals, a vast botanical garden, an amphitheater and an interpretation center equipped with all the camping facilities.

This is one of the most visited tourist spots in Gandhinagar. Located by the riverside in Gandhinagar, one can find peacocks and other migratory birds playing around the park. The lush green patches, along with the hustle-bustle of the birds, provide with the most peaceful environment. It takes about an hour's walk to explore the park.

Punit Van is a botanical garden. It was developed in 2005 by the forest department of the Government of Gujarat. The planted trees are associated with stars, planets and zodiac signs. It has almost 3500 trees with an astrological significance according to Hindu mythology. The garden is divided into five massive additives: Nakshatra Van, Rashi Van, Nav Grah Van and Panchvati Van. Park is a place of herbal, semi-herbal or planted space set apart for human leisure and endeavor or for the protection of natural world or herbal habitats

4500 years of history has endowed Gujarat with some of the greatest historical and archaeological monuments. Lothal offers insight into the Harappan civilization & Ahmedabad has specimens of Indo-Sarcenic architecture. 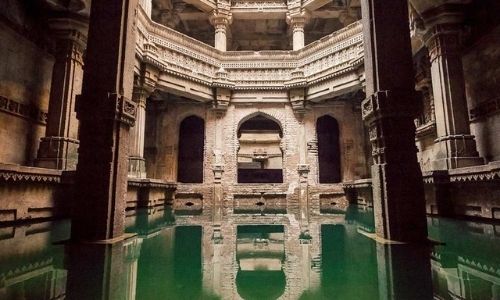 Adalaj Vav or Stepwell is a popular excursion place that can be found in Ahmedabad in the state of Gujarat. This tourist destination is located from a distance of 19km from Ahmedabad. The architecture of this place indeed makes it as one of the architectural wonders in Gujarat. Adalaj Vav has been constructed in a seven-storied structure. It has got a number of chambers that can be found inside it 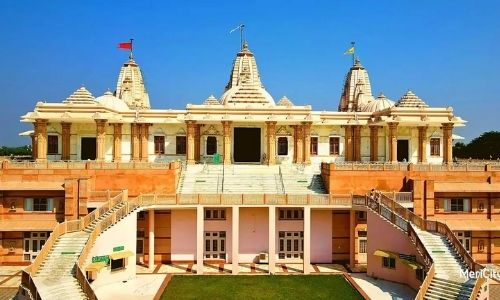 This iconic landmark of Gandhinagar is made from pink and white marble and sandstone and the temple has two staircases that run on either side of the temple building leading to the first floor. The main temple structure has manicured gardens to relax in. The temple is an ode to the multi-faith concept. The temple complex pans out at an expansive area of 40,175 sq. ft. 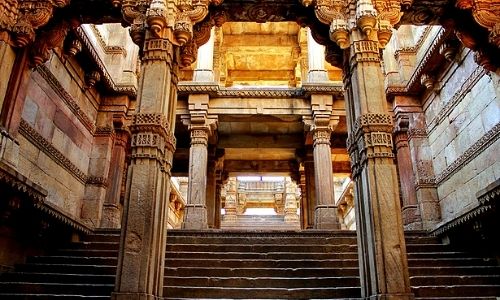 The stepwell was built in 1485 by Dhai Harir, a household lady of Mahmud Begada according to the Persian inscription in the stepwell. The name later corrupted into Dada Hari. Built in sandstone in Solanki architectural style, the Dada Harir stepwell is five stories deep. It is octagonal (8-sided polygon) in plan at the top, built on intricately carved large number of pillars. Each floor is spacious enough to provide for people to congregate. It was dug deep to access ground water at that level, accounting for seasonal fluctuations in water level due to rainfall over the year. The air and light vents in the roofs at various floors are in the form of large openings.

Sabarmati Ashram (also known as Gandhi Ashram) is located in the Sabarmati suburb of Ahmedabad, Gujarat, adjoining the Ashram Road, on the banks of the River Sabarmati, 4 miles (6.4 km) from the town hall. It was from here that Gandhi led the Dandi march also known as the Salt Satyagraha on 12 March 1930. In recognition of the significant influence that this march had on the Indian independence movement, the Indian government has established the ashram as a national monument. For details visit
https://gandhiashramsabarmati.org/en/ 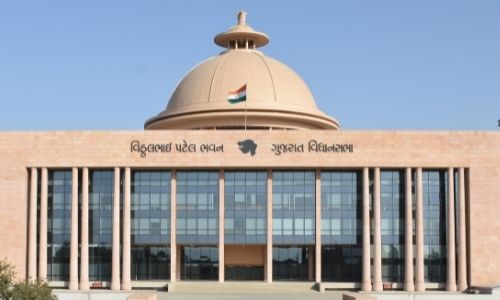 President Neelam Sanjiva Reddy laid foundation stone of new assembly building, Vithalbhai Patel Bhavan on 20 March 1978. It was designed by H. K. Mewada, chief planner of Gandhinagar. The construction was completed in July 1982 and it is named after Vithalbhai Patel, the first Indian speaker of Central Legislative Assembly during the British period. It is constructed with Reinforced concrete and the outer walls of the building is affixed with Dholpur light pink stones. The building is constructed on the 133 square metre platform amid a water pool having diameter of 200 metres. 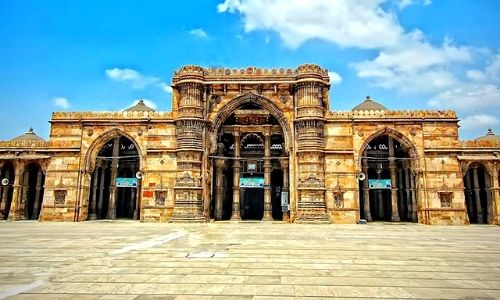 Jama Masjid, one of India’s most marvelous pieces of architecture, was built during the rule of Ahmed Shah I, a ruler of Muzaffarid dynasty, in 1423. The Mosque is made of yellow sandstone with a blend of Indo-Saracenic architecture, with intricate carvings all along the walls and pillars. The main prayer hall has 260 columns supported by 15 domes. The wide, marble-floored courtyard is surrounded by an arcade painted in Arabic calligraphy. Right in the centre of the courtyard is a tank for ritual purifications.

On the ancient site of Ashaval and Karnavati, Ahmedabad was found on 1411. The City of Ahmedabad has some of the finest India, Islamic monuments and exquisite Hindu and Jain temples. With the purpose of unveiling the city to the tourists and the citizens themselves, Ahmedabad Municipal Corporation conducts a HERITAGE WALK